Cotton swabs in the top 5 of plastic items found in the Meuse and its tributaries!

Home » Cotton swabs in the top 5 of plastic items found in the Meuse and its tributaries!

In recent weeks we have had to deal with extreme rain showers. But what do these showers have in common with cotton swabs? During heavy rain showers, not only the streets but also the sewers fill up. At a certain point, so much water accumulates in the sewer that the collecting basins threaten to overflow. To prevent the streets from being flooded, sewage water must be discharged into the Meuse at an accelerated rate, without being filtered first. We call this sewer overflow. In most cases, a wave of sanitary waste flows with the water into the Meuse. In this news item we discuss the following:

What are cotton swabs for?

Cotton swabs come in different shapes. The short variant is also the most famous variant, but you also have long swabs.

What to use cotton swabs for:

It is well known that people use swabs for cleaning ears. In addition, women also make frequent use of it when applying and/or removing make-up. The long variant has also been widely used for corona testing since the Covid-19 pandemic. And hobbyists use cotton swabs for, for example, cleaning small delicate parts such as clocks and watches and miniatures or curiosities.

How are cotton swabs made? Or rather from what?

Swabs are made from various raw materials, but in recent decades they have mainly been made from plastic. If you look at the back of a package you will often see the following: Cotton swabs plastic. Swabs composition: cotton wool 100% cotton. Stick: plastic. Fortunately, there are more and more alternatives, such as paper or paper cotton swabs, wood or wooden cotton swabs, cardboard cotton swabs, bamboo swabs or biodegradable cotton swabs. 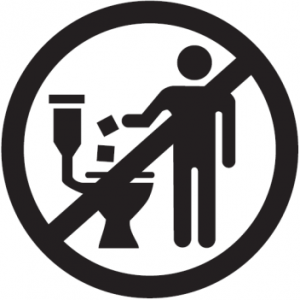 But what do we mean by sanitary waste: plastic swabs, butt wipes, cotton pads, sanitary napkins, et cetera. If the sewer overflows and are opened, a sanitary waste wave is created. To avoid this wave you have to remember the 3 P’s. The 3 P’s are poo, pee and (toilet) paper is only allowed in the toilet. Anything with plastic in it belongs in the trash! But in which waste bin should they go?

Cotton swabs, in which waste bin?

Despite the new European SUP rules, which came into effect on July 3, 2021, plastic cotton swabs are banned, among other things. If you want to know more about the new European SUP rules, click here! Despite this new arrangement, they will not be out of circulation immediately. Many people currently still have the plastic variant at home and throw it in the toilet or throw the swabs with the plastic waste, but this is not the right place. They should always be thrown in the residual waste bin! They are made from multiple raw materials, so they cannot be thrown into special waste processing.

As the title implies, swabs are in the top 5 of most found items in rivers. Under normal circumstances, you will find 15 cotton swabs per 100 meters of riverbanks in 44% of the measurements. This number will most likely be higher in the coming period, because much of it was discharged directly into the rivers via the sewer overflow. Efforts will be made to clear up this litter as much as possible in the coming years. As a result, the number may be higher than normal.

But how bad are cotton swabs?

Swabs are bad because they are made of plastic in 9/10 cases. If these end up in nature, they slowly break down and microplastics are formed. What are microplastics? Microplastics are very small pieces of plastic (less than 5 millimeters in diameter) that end up in nature. They eventually end up in plants and animals. Little is known about the effect on humans. What is clear is that marine animals, such as fish and birds, such as gulls, absorb microplastics through their food. Several studies are currently underway into the presence of (mirco)plastics in the environment, their distribution in the environment, the effects on organisms and the consequences for the food chain.

In short, if you want to use cotton swabs, always throw them in the trash after use. Prevention is always better than cure.

Would you like to know more about products that end up in nature and/or whether it poses a problem for the Meuse and its tributaries?

Keep following our social media channels and make sure you are always informed! Did you know that wipes are also a big problem? Read more about it in the news item: Facts about wipes you didn’t know yet!