The film ‘Plastic Free Challenge for the Meuse’ is online. The film shows the challenges that the participants in the LIVES project face to realize their dream, ‘a plastic free river in 2030′.

Plastic doesn’t belong in the water, but once in it, it’s hard to remove it. This also applies to all banks along the rivers. Plastic gets stuck in the sediment due to the frequent flooding of the banks, breaks down into millions of small pieces over time and becomes part of plants. This is how it spreads in animals and ultimately in humans.

The LIVES partners are dealing with cross-border rivers in which the amount of plastic is increasing. Not a pretty sight. In the long run, this can lead to serious contamination with eventually the consequences for plants, animals and humans. Sadly there is no legislation about responsibilities, both nationally and internationally. If we want to tackle the problem, cooperation is essential.

In the film, some partners underline the importance of this collaboration.  For example, monitoring teaches us a lot about the location of hotspots. Through long-term monitoring, we can draw up trend analyses in order to be able to determine the social and economic damage in the longer term and can thereby also underline the social urgency of the problem. Euregional cooperation in raising citizens’ awareness is also an important pillar. Only by making people aware of their own behavior, a change in behavior can be brought about.

The speakers in the film: 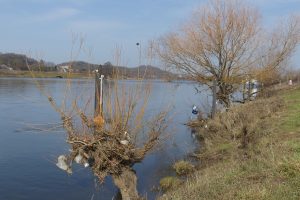