Flemish LIVES partners join forces! The extreme high water of July 2021 was a bad dream come true for the LIVES partners. The entire river basin of the Meuse in Belgium and the Netherlands was flooded with tons of high-water floating waste. Huge amounts of organic, but also enormous amounts of inorganic material flowed at high speed through the many streams and the Meuse to settle on the banks as the water level dropped and the water became calmer. We have already shown the result a number of times. In the Netherlands, the various authorities have already joined forces, but the Flemish LIVES partners, who were also confronted with an enormous bulk of materials, soon came to the conclusion that cleaning up could only be done with combined forces. 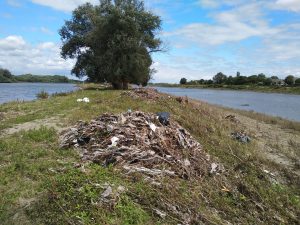 Cleaning up as coordinated as possible

In both the Netherlands and Belgium, the various responsible bodies (Rijkswaterstaat, De Vlaamse Waterweg, Waterschap, etc.) immediately started inspecting the banks and clearing up large materials as much as possible. It soon became clear that clearing up would require a lot of manpower and that it would be best to join forces. Joint consultation soon resulted in the first clean-up actions: De Vlaamse Waterweg, together with volunteers from Natuurpunt, Limburgs Landschap and Mooimakers, set to work in Lanaken during the weekend of 31 July – 1 August to clean up the zone from Smeermaas to Herbricht. But clean-up campaigns were also planned around the other Maas municipalities of Maasmechelen, Dilsen-Stokkem, Kinrooi and Maaseik, under the coordination of OVAM (Mooimakers) and Limburg.net. OVAM provided the much-needed guidelines for the disposal of the waste. After all, it was known that dangerous substances, cadavers and even mortal remains could also be found among all materials. The Flemish Waterway provided containers for the removal and disposal of the collected waste.

The impact became clear soon after the high water. Poignant images were discussed on social media of washed up household goods, toys, refrigerators, half caravans, shed roofs, waste containers, uprooted trees, etc. Like in Kerkeweerd (Dilsen-Stokkem). Here were at least three large refrigerators, one of which was even nestled in a tree at a height of 2 meters. Items that are too heavy to carry alone but often carried 100 km by the force of the water. The contents of the freezer compartment were unaffected. The picture was somewhat hopeful: what was striking was that, where during previous high waters, an infinite amount of bags and torn plastics hung in the trees and barbed wire, it was now mainly plant parts. Of course a lot of plastic was still found, but in different forms. 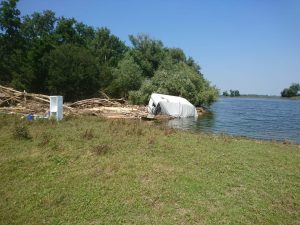 Blanket of sand and silt

In addition to an enormous amount of wood and plant parts, a large amount of sand and silt was also carried away during the flood. The Kerkeweerd nature reserve is therefore completely covered under a blanket of 2 m of sand. This produces beautiful images.

What has the collaboration yielded?

Due to the quick action and the cooperation between the various competent authorities, a very large area could be cleaned up in a short time. In total, more than 40 tons of waste was cleaned up on the Flemish side of the Meuse. This is certainly thanks to the help of many volunteers, without their commitment, apart from the human suffering caused by the floods, nature would suffer from the consequences of this exceptional situation for a long time to come.