Are diapers as big a problem as butt wipes?

Home » Are diapers as big a problem as butt wipes?

On average, parents change their baby five times a day. Most parents use disposable diapers (such as Pampers). Calculated per child, this is about 150 diapers per month. an average of 1,800 diapers per year! The exact number can of course differ, depending on, among other things, the age of the child, what a child has eaten or drunk, whether it is sick, and of course the toilet training process that a child goes through.
Every day a lot of diapers disappear in the trash. At least that is the intention. However, diapers are also more often found in organic waste, in nature or in surface water and in the worst cases in the sewage system (often resulting in blockage!). Not good, because in addition to chemicals that ensure that a diaper absorbs sufficient liquid, a diaper also contains plastic. The estimated decomposition time of a diaper is 400 to 450 years. So it’s high time to dive into the diapers!

Diapers are intended to be moisture-absorbing underwear used to collect faeces and urine. There are diapers for different target groups, namely:

In addition to the diapers for different target groups, you also have different types of diapers, namely: washable diapers vs disposable diapers. But what are they made of?

What are diapers made of?

Diapers what’s in them? That differs per diaper. There is a big difference between washable diapers and disposable diapers.

Yes, they still exist: washable diapers! They are actually back with a vengeance.
Washable diapers, also called hydrophilic diapers, are usually made of (eco) cotton, synthetic fiber or bamboo. Because you can wash them, you can use them more often.

Why washable diapers? People are (again) increasingly opting for a washable diaper because it is better for the environment. Why? Firstly, because they reduce waste. In addition, washable diapers score better in terms of energy consumption, even if you count washing. And of course it makes a huge difference in the wallet! You can easily spend between 20 and 50 euros per child on disposable diapers.

But hydrophilic, washable diapers also have a downside: you need to have a large supply and it takes time to wash them. And especially that washing is not always nice. It is not the intention to just throw it in the washing machine. The droppings can cause your washing machine to clog. You often have to prewash them by hand before throwing them in a washing machine.

Disposable diapers come in various variants, but the composition is largely the same. They are usually made up of three layers:

In short, disposable diapers are made of paper, plastic, plastics, fibers and a super absorbent polymer (SAP).

Now that we know what they are made of, the question of nappies organic waste or residual waste may be easier to answer.

Diapers for which waste? 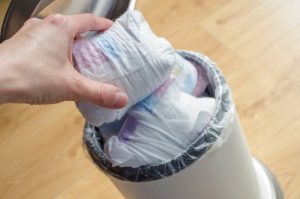 A question that is often asked is: “what should diapers go in? With plastic, organic waste or residual waste?” Almost every parent throws them in the diaper pail, a bucket/trash can that can be found in every household of young parents these days. But where do all those diapers that you have collected separately eventually go?

Diapers in which container?

In many cases diapers (especially at home) are collected separately, but then what? Need diapers with plastic, because they contain plastic after all. Or do diapers have to go with organic waste or diapers with residual waste? That is a good question. Since they contain plastic, as well as feces and urine, diapers are difficult to separate. That is why diapers should always be thrown away with the residual waste. The packaging is usually made of plastic, which must then be disposed of with the plastic waste.

Did you know that a baby/child in the Netherlands produces about 275 kilos of diaper waste!?

Make a choice that suits you

Every parent makes their own choices when it comes to taking care of their child. The diaper choice is one of them. Hopefully, all parents also make the right choice when using and disposing of the diapers! We shall see!

Litter free rivers and streams is committed to clean rivers. Part of the project, one of the missions of all partners, is to make people more aware of the consequences of carelessly throwing away an everyday utensil. In this case, a diaper. By identifying which potentially harmful substances certain everyday utensils contain, LIVES tries to make people think and reconsider choices for using and disposing of them. In this way, the LIVES partners hope to reduce litter in nature and our beautiful rivers and streams by providing clear information. 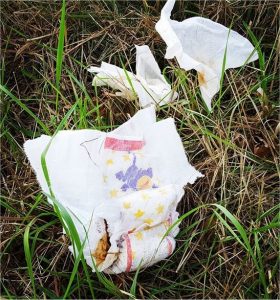