Litter, nobody is happy about it, nobody causes it and yet if you look around you, you will find it everywhere

Home » Litter, nobody is happy about it, nobody causes it and yet if you look around you, you will find it everywhere

In the Litter Free Rivers and Streams project, Waterschap Limburg is working together with German and Belgian water managers, Rijkswaterstaat and a number of educational institutions on measures to reduce the amount of litter in the Meuse and its tributaries. Waterschap Limburg has a number of questions that it would like to have more clarity about. Firstly: “How much litter flows from our rivers and streams to the Meuse” and secondly “Can patterns be recognized if you look at the composition and size of the litter that you find?” Extensive joint research is being conducted to answer these questions.

Waterschap Limburg is conducting research in two rivers: the Roer and the Geul. The Roer and the Geul are two cross-border brooks that meander through the Heuvelland and flow through both nature reserves and urban areas. As a result, a lot of litter ends up in these rivers. These waters were chosen because of the existing waste collection installations. In addition, water users (in this case the millers) can also be involved in the research.

Waterschap Limburg approached millers in the Geul with the question whether they wanted to participate in a litter survey. Research was carried out at six locations: the Volmolen in Epen, de Bovenste Molen in Mechelen, Molen van Otten in Wijlre, the floating beam in Valkenburg, de Geulhemermolen in Geulhem and the Speltmolen/Groote Molen in Meersen. The research took place from September 2020 to October 2021. Every month, IVN volunteers determined the amount and composition of the litter per location using the OSPAR method. The OSPAR method is an internationally recognized citizen-scientific beach and river survey to determine the quantity and quality of litter. In addition, the Geul was inspected for litter in April 2021. The litter found was also examined by the IVN staff and added to the research result.

The results in the Geul 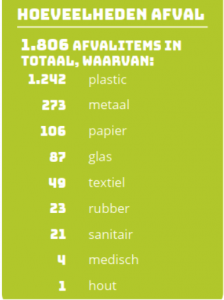 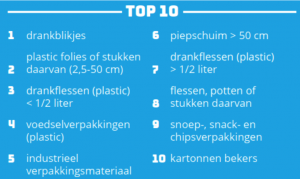 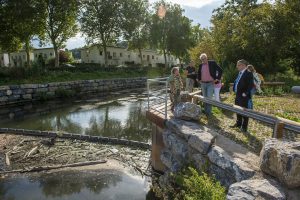 Trash catcher in the Geul with litter

The investigation of litter in the river Roer was twofold;

For the research in the Roer, the location near the hydroelectric power station ECI was used. An automatic dirt trapping installation has been installed to protect the turbines in the hydroelectric power station. A little upstream of this location is a floating beam construction that protects a pumping station against floating debris during high water on the Roer/Maas.

The results in the Roer 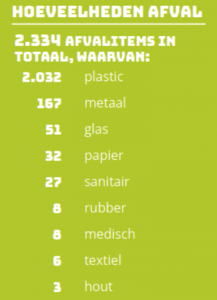 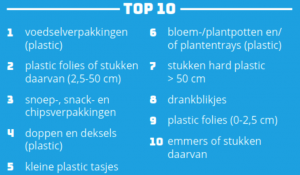 Garbage collectors in Roer with litter

The study faced a number of setbacks during the study period. First, COVID-19. Due to the travel restrictions, the recreational pressure in the Heuvelland was different than in previous years. Although measurements have been taken, the numbers may be different. In order to determine whether this is the case, it is necessary to repeat this investigation in a ‘normal period’.

Secondly, there was the high water wave of July 2021. In view of the enormous amount of material, because high water litter could not actually be called this, no measurements could be made. This, like the previous reason, would have caused too much of a distorted picture. This period has therefore also been disregarded.

Despite everything, important information has been collected regarding litter:

For the River Geul, it was noticeable that the volume of litter increased significantly when certain areas were reopened or corona restrictions were lifted.

It was striking for the Roer River that, in contrast to other years, virtually no plastic drinking cups were found at the ECI waste collection installation during the carnival period.

Litter distribution via the water column

The collection campaign of the contractor in De Geul teaches us that litter is deposited on banks and in places where trees and/or branches are in the water. Litter stays in the water system for longer, with the result that large plastic parts are shredded into small pieces. The small pieces are more difficult to remove. That is why it is extremely important to collect the litter as quickly as possible and as close as possible to the source area.

Furthermore, it emerged that a floating beam facility mainly captures types of litter that float on the water. This is in contrast to dirt trap installations with grids that cover the entire water column.

Litter and environmental use

The use of the environment influences the type and size of the litter. For example, we find tennis balls near sports clubs and cans and candy wrappers at schools.

Involving environmental users in managing the litter problem can be functional. Millers and other volunteers were now used, but fishing clubs or canoe rental companies, etc., could also play a useful role. In addition, the waste trap at the ECI hydroelectric power station protects the turbines because the litter is removed from the water before it can reach the turbines.

Currently, Waterschap Limburg is mapping out patterns and relationships based on all the information collected. This is followed by the translation in follow-up actions. As it stands, it makes sense in the short term to take another look at the relationship with environmental users and source measures such as awareness campaigns. In the medium term, the knowledge gained will be used to set up new waste collection installations in other streams such as the Niers and the Geleenbeek. So for the time being, the Water Board is not sitting still!