Volunteer Francis Telen ensures a clean environment for everyone. The LIVES partners have committed themselves to limiting waste and plastics in the Meuse and its tributaries as much as possible. In this context, the Flanders Environment Society (VMM) communicated in October 2020 that they had placed more than 10 litter traps in the catchment area of the Meuse and the Demer. But placing litter traps is not enough. They also need to be emptied. Fortunately, there are volunteers like Francis Telen who take on this unpleasant job with love.

Francis Telen has been working as a volunteer at the Limburgs Landschap vzw for years.

Limburgs Landschap vzw is a site-managing nature association that manages about 3000 hectares of nature in Belgian Limburg. “About ten years ago I became curator of the Tösch-Langeren nature reserve”, says Francis. “Tösch-Langeren is a nature reserve between Neeroeteren and Maaseik (Belgium), directly west of Wurfeld. It is part of the Schootsheide complex and is owned by Limburgs Landschap vzw. The area is 97.5 acres and consists of two parts: Tösch to the south, and Langeren to the north of the Bosbeek. Together with four other volunteers we do the management in this area. why? As an Indian wisdom proclaims: We have inherited the world not from our parents but on loan from our children” 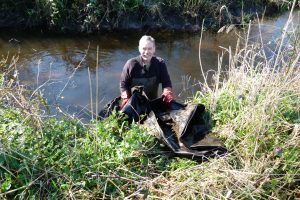 What are the daily tasks?

Francis and his fellow volunteers are on standby every Wednesday. Checking and emptying the litter trap is the first job to be done, before taking care of the rest of the area. “When we are in our area, we immediately clean up the litter. Dirt attracts dirt! At the end of our daily routine, we put the bags of waste in an agreed place where the people of the municipality pick it up. If there is an abnormal amount of dirt (a lot of Styrofoam) in it or rarities happen (someone had dumped his compost pile in the stream the other day) we are notified by the neighbors and intervene. Unfortunately, this is the case a few times a year,” Francis said. The litter trap is visible from a bicycle/walking trail. “This hopefully makes people think,” Francis continued. “Many have respect and admiration for our work, others question why we ‘have to’ clean up the filth of others”. 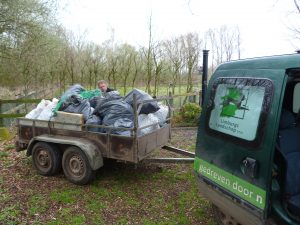 What foreign objects has Francis Telen encountered while cleaning up?

As in many other areas, the banks and bed of the Bosbeek are cleaned during an annual clean-up operation. Francis: “When we started this 5 years ago, we collected 90 garbage bags of waste over a length of barely 2.2 km (entire length of the stream in this area). This dirt has accumulated over the years and comes back to the surface over time. Sometimes there are strange things in between such as a waterbed and an aquarium. The logic of the dumpers must have been: ‘If it floats, it’s green or it has something to do with water, it belongs in the stream’. In addition, bottles and cans make up the majority. Tennis balls are also common. We contacted the local tennis club about this. The other day we found roofing of an old barn. Due to the risk of asbestos, this must be carefully removed. Safety of the volunteers comes first! The most annoying are the bags of dog poo. I always ask myself: does the solution not miss the target here? Residue from mowing the lawn is also a problem: you can’t get this out of the stream by hand, but it does hinder the drainage of water. People just don’t think about what negative effect their action can have on the functioning of a stream”. 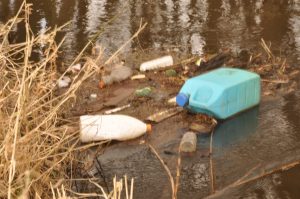 Improvement for the future!

Francis believes in people’s learning ability but also hopes for directions from above. “There is certainly a reduction compared to five years ago when we started cleaning the stream. But of course there are always ‘diehards’ who never want to learn. The LIVES project will certainly help reduce (plastic) waste in our waters”. Developments such as less packaging and deposit will certainly help, Francis thinks. “I think this is an important task for the government. Guidance from municipalities and regional (and national) government is absolutely necessary. Constantly raising awareness, preferably in the most personal way possible or for example with the help of celebrities, can also help. But above all also personally address the local and regional cycling, walking clubs, neighborhood associations etc. and point out their responsibility. Perhaps more enforcement would help, because at the moment the chances of getting caught are quite low. Moreover, the fines for illegal dumping are now very low. But, to conclude positively: there will be improvement in the near future!”.